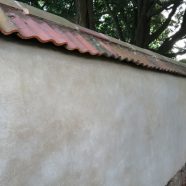 The owner of a Devon cob property based in Exeter wanted repairs carried out to the boundary cob wall.

The cob wall was showing signs of deterioration. Previous inappropriate cement-based renders had been applied to the cob wall. Over time cracks had developed in the render allowing the ingress of water and the slow deterioration of the underlying cob substrate. Cob walls need to be able to “breathe” through lime-based finishes.

It was decided that the cob wall would be taken down to meet the height of the adjoining boundary wall.

Where the cob wall had deteriorated, cob blocks were bed in lime putty mortar and other areas dubbed out using stone. Once all the cob repairs had been completed, the lime putty render could then be applied.