Posted by admin on Mar 19, 2018 in Lime Plastering, Our Project Portfolio | 0 comments

Posted by admin on Feb 6, 2018 in Masonry & Carving, Our Project Portfolio | 0 comments 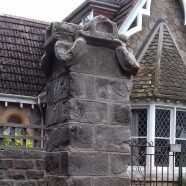 Rebuilding of damaged stone pier after hit by a...

Posted by admin on Apr 10, 2016 in Lime Rendering, Our Project Portfolio | 0 comments

Client : Aylesbeare PPC Extent of works   Lime render The original lime render had almost completely disappeared on the tower allowing erosion of the underlying Heavitree stone. New lime render was applied to three of the four elevations. The lime render was applied using a render gun. Using the render gun allowed a good bond between coats, especially the first coat, which needs to adhere well to the substrate and provide a good key for subsequent coats. The final coat was rubbed back with a combination of wooden and poly floats and sponges to achieve the desired finish. Vice turret The...

Posted by admin on Oct 27, 2015 in Lime Mortar Repairs, Our Project Portfolio | 0 comments 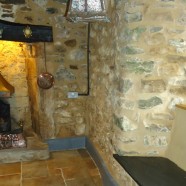 Damp areas internally led to the removal externally of hard cement mortar pointing to the gable end wall and replaced with a softer ‘breathable’ lime mortar. Internally the plaster had been painted in a non-breathable paint which meant the wall could not ‘breathe’ and led to the plaster becoming damp and detaching from the wall surface. The plaster was removed revealing the stonework underneath. This was found to be in better condition than originally thought. Instead of reapplying the lime plaster it was decided that the stonework would be left exposed to add...

Areas of damp internally led to concern externally of defective pointing to the walls and the chimney. A ground level inspection of the external wall found hard cement mortar pointed over original lime mortar. Once scaffold access to the chimney was in place large voids around the chimney base joining the roof and defective pointing to the chimney stack revealed areas of potential water ingress. The hard cement was removed and repointed using natural hydraulic lime mortar. Thatch repairs were carried out by Philip White, Master Thatcher.